Socialism and democracy in Czechoslovakia 1945-1948 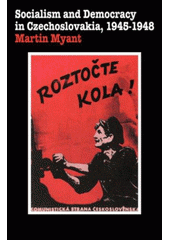 ► Ocenění, recenze a další doporučené čtení
▼ Doplňující informace k obsahu
Souhrn
This book is about the political, social and economic changes in Czechoslovakia in the years 1945- 1948. In 1945 the 'national revolution' established the Communist Party as the dominant force within a coalition government. The leading Communists then evolved the idea of a specific Czechoslovak road to socialism that could bypass the 'dictatorship of the proletariat'. By analysing in detail the revolutionary events and the society that emerged from them, the book demonstrates that there was a real possibility of developing a distinct model of socialism containing a plurality of parties and a sizeable private sector. Such thinking, however, was effectively ended in February 1948, when the Communist Party established a monopoly of power. The fundamental causes of this change in the party's strategy are to be found, it is argued, in the international situation. The February events were of international significance as they confirmed the division of Europe into two blocs. The concluding chapter shows how important they were for the subsequent development of Czechoslovak society.
► Prohlížení regálu
► Záznam ve formátu MARC
◄ Výsledky vyhledávání Zobrazeno 3. záznam z 26
◄ Předchozí Další ►